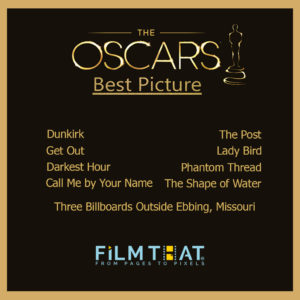 Down to the Wire: The Race for Best Motion Picture of 2018
February 25, 2018Blog Film Industry Film Poll Films

This year, the genres and themes of the candidates for the big award: Best Motion Picture, have never been more diverse. With a brilliant social satire wrapped up in a horror film, a sweeping wartime epic, all-star casts in a pair of politically fascinating period pieces, a taut small-town drama, and a strange romantic fantasy among the front-runners, we see how the Academy is moving away from predictable choices. The field is wide open too. Any of the nine candidates would be a worthwhile winner.

So which is it going to be? According to my own informal Twitter polls, which I posted in bracket form to get to the ultimate winner, it’s going to be Get Out, Jordan Peele’s solo directorial debut. Get Out captured 60 percent of the votes in its bracket, beating Call Me By Your Name, The Post, and Darkest Hour to go up against Dunkirk, the other bracket winner. 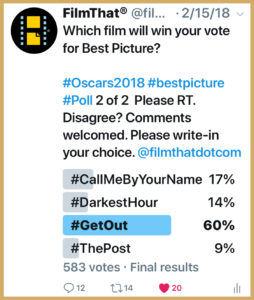 Dunkirk handily swept its bracket too, earning 45 percent of the vote versus Three Billboards Outside Ebbing, Missouri, The Shape of Water, and Ladybird. 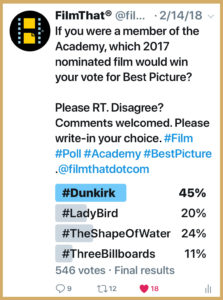 In the final poll, Get Out just edged Dunkirk, but remains a statistical dead heat. 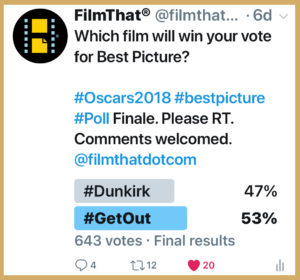 Dunkirk, is the film that looks more like past winners in its plot and subject. The Academy often rewards well-told histories, especially those set in turbulent times. I viewed Dunkirk on a refurbished 70mm film projector in an IMAX theater. From that dark and grainy vantage point, it was the most realistic, engrossing, visually stimulating, and edge of your seat action film of the year.  Dunkirk also has recent history going for it; when last year’s Moonlight, a $1.5 million indie film filled with intimate views of complex characters, beat the big-budget extravaganza La-La Land, it upended expectations. That could mean the Academy will return to form this year and award the Oscar to a historical drama with an ambitious budget and a more experienced director.

On the other hand, the diversity of the Academy’s choices suggests that the film industry’s most powerful people are widening their gaze to include less traditional themes and genres. We may not see an Academy Award for Best Picture go to a film set in the Marvel Universe anytime soon – although with Black Panther being a huge box-office and critical hit, it could happen sooner than we might think – but neither are we likely to see nothing but period dramas and classic Hollywood romance as the Oscar front-runners.

Despite the Twitterverse’s voice, the winner may not be either of these films. It wasn’t the highest-scoring, but we might very well see a fantasy film take the Best Motion Picture Oscar for the first time since Lord of the Rings: The Return of the King surprised a lot of film fans in 2003. It’s very possible that The Shape of Water is awarded the Oscar for Best Picture, and here’s why.

Guillermo del Toro has been one of those rare directors who moves easily from hauntingly beautiful low-budget labors of love like Pan’s Labyrinth to big-budget blockbusters like Pacific Rim. That versatility infuses all his projects with a distinct viewpoint, and the Academy has historically rewarded auteurs with strong, immediately recognizable perspectives. The film is also a strong contender in its own right, telling a moving love story in lush, blue-tinted visuals and gracefully understated acting instead of words. Perhaps more important, it tells a classic story in an unusual way, which I feel hits the sweet spot between the Academy’s respect for film traditions and its openness to new experiences.

So which film will be awarded the Oscar for Best Picture? I’m going to stick with my original prediction of Lady Bird as the big winner. Gerwig gives men and women the ability to experience the struggles and special relationships between girls and women, Lady Bird and her mother. Using time honored filmmaking and screenwriting techniques, she brings their dreams, desires, actions and faults into sharp focus, contrasting one against the other. It’s a beautiful film, laid out like a bed of roses with thorns for all to see. In doing so, Gerwig elevates Lady Bird into a high artform worthy of the Oscar.

This prediction is one of the few times I wouldn’t mind being wrong, but only because all of this year’s crop of moving, thought-provoking films could be a worthy winner. I look forward to seeing whether the wisdom of the crowd wins the day and we see Get Out take it, as my Twitter feed suggests, or if the Academy surprises us all with another unexpected pick.