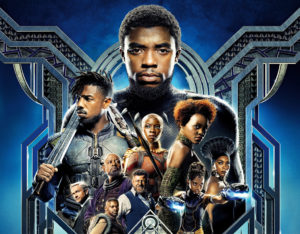 James Baldwin wrote eloquently about the capability of film to transform American society: “the obligatory fade out kiss in the classic American film did not speak of love, and still less of sex, it spoke of reconciliation, of all things now becoming possible.” Possibility echoed through the rumors of Idris Elba as James Bond, which I wrote about a year ago in “Why Can’t James Bond Be Black?” and can also be seen in the casting decisions of A Wrinkle in Time. Now, that promise is manifest in Black Panther.

The cadre of superheroes including Superman, Batman and Iron Man have an exciting addition to their ranks. There’s a new top-grossing superhero film, and it’s Black Panther, according to Access Hollywood’s latest figures. Its phenomenal success puts it up there with box-office legends such as Frozen, Titanic, and Avatar. With more than $1.3 billion worldwide gross (and counting), the movie is set to break more records. This kind of success has the power to change how film studios green-light projects and open new horizons for actors and directors.

What can Hollywood take away from the triumph of Black Panther? Is there a secret formula for success here? I think it’s something richer and deeper than just the financial reports.

Audiences want recognition; they want to see themselves reflected on the screen in positive, powerful ways. As part of the Marvel cinematic universe, Black Panther presents a vision of more than just one hero. It welcomes viewers into an entire fictional nation and a world in which all heroes – and yes, villains and henchmen too – are not the traditional, granite-jawed white guys. As Lupita Nyong’o put it when talking to Nerdist’s Markeia McCarty, “Cinema has an opportunity to show us where we’ve been, where we are, and where we could go.”

Black Panther takes us to Wakanda and shows us a perspective too many audiences have never gotten to see. Most of the films we see draw on traditions from Western Europe in ways we aren’t even conscious of, presenting them as the default culture. But the world is a far larger place, and Black Panther’s art direction, costume design and overall aesthetic revel in that. From the fabric and costume choices to hints of political structures, the film is influenced by pan-African traditions.

The film feels authentic to its source material and location because it is, thanks to careful research and thoughtful art direction. It’s a fictionalized and stylized blend of African influences from all over the continent, but because the source material is clearly grown in African soil, it gives us a wholly new perspective. We’re invited to Wakanda, and we see it as its own place rather than in relation to Western European art and culture. With a different set of cultural touchstones, Black Panther gives us a new visual vocabulary.

What makes this shifted perspective work so well is that the film takes the time to make sure cultural information is shared. Cultural signifiers only work well if everyone can tell what they signify, so Black Panther needed to be able to tell the story of African history, both real and fictionalized, in the film’s aesthetics.

As a society, we’re embracing inclusivity, and films are reflecting that change. Representation matters, but so does seeing that heroes can come from anywhere and look like any of us. The film resonates because it speaks to universal themes, welcoming all audiences to be a part of it. By highlighting black superheroes and sidekicks, Hollywood is also moving us forward.

Idris Elba has said he wouldn’t play James Bond, but that doesn’t mean the idea of a black Bond is out of reach. If anything, it’s another example of “all things now becoming possible” for other actors. As I wrote last year, hopefully, the era of “whitewashing” is on its way out.

The best superhero movies are those that tell great stories with outstanding actors, and Black Panther is no exception. Lupita Nyong’o is already recognized as a prodigious talent, and Michael B. Jordan has drawn praise since his debut in The Wire. Chadwick Boseman is brilliant in the title role, and Daniel Kaluuya’s raw emotion evokes Loki’s memorable role in Thor and The Avengers. These talented actors don’t always get roles that let them show their full range, but Black Panther proves how much they deserve to.

Genre movies can produce huge box-office returns. Some of the highest-grossing movies ever have been science fiction, fantasy or superhero films. However, financial success doesn’t always translate into respect from critics. Black Panther (and Iron Man and Wonder Woman before it) prove that although this genre can include big budget special effects and flashy editing, it is the tight pacing, vivid characterization and lively dialogue which showcase the writers’ skill. This combination of stunning visuals, great story, and amazing acting talent make the film worth watching.

But it is more than the sum of its cinematic parts which makes Black Panther what will surely be a legendary movie. It is the ripple effect of its influence. It begins with the audiences who have shown their enthusiasm and then spreads throughout the industry. From the actors receiving critical acclaim to the screenwriter and director staying true to the original vision and onward to the Hollywood studio executives and streaming service providers who are taking notice. This is not just about the business side of filmmaking. It is about what people want to see because of how it makes them feel. It emboldens and encourages more open thinking about the new reality of worlds, cultures and ideas waiting to be explored. It is about the emergence of inclusive representation for all within the industry which is now on the horizon. This new dawn brings hope. And hope brings the promise of all things now possible.

Jonathan Roberts is an award winning director, filmmaker, screenwriter and NYU Tisch Film School student of cinema and commercial filmmaking with a passion for telling cinematic stories with drama and humor.