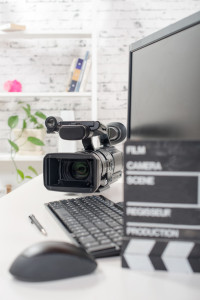 Cinematic magic happens when great directors are paired with great film editors. Editors make sure the director’s vision comes through clearly and coherently. They check for continuity errors, and assemble raw footage into a polished film production.

Large studio productions generate hundreds of hours of film, but the finished film’s run time is rarely longer than two or three hours. Most of the work to cut down a film to its essentials is done by the editor, who works closely with the principal director to ensure the integrity of the creative vision. Editing is what ratchets up the tension in horror films, makes action movies exciting, narrative arcs understandable and turns complex films into works of art.

Academy Award-winning film editor Walter Murch describes his profession as “sort of a cross between a short-order cook and a brain surgeon.” Editors sometimes work frame by frame, splicing film together half a second at a time to get the timing of a scene just right. This exacting process also involves working with sound directors, Foley artists, and cinematographers to produce the perfect scene.

Because the editing process is so extensive on major film releases, editors typically work in teams. Sound editors match what audiences see on the screen with what they hear. Continuity editors are in charge of fitting filmed sequences together while watching for continuity errors like a plate that appears to empty, then fill again over the course of a dinner scene. Post-production editors oversee special effects, and coloristsmake footage match perfectly from shot to shot. For smaller productions, one editor may take over some or all of these roles.

Whether they act as principal film editors or contribute to an editing team, film editors need in-depth knowledge of the film industry as a whole, recording technology, editing software and movie production.

Great film editors are often a second set of eyes that gives directors a new perspective on how the story and film can look its best. They need a keen sense of the director’s and cinematographer’s intent, compelling camera angles and artistic composition so they can carry out their vision. Although they often work long hours alone, editors must also be skilled at working within a director’s framework.