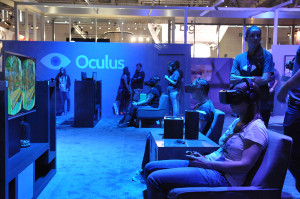 For years, science fiction enthusiasts and writers have been predicting that major motion pictures would use virtual reality so that audiences would be able to completely immerse themselves in the film’s story. The technology is now catching up and perhaps sometime in the near future, virtual reality movies will become commonplace.

There’s something bigger on the horizon than traditional 3D movies and that is the Oculus Rift. It’s isn’t exactly the holodeck from the newer Star Trek franchises, but it could help wearers boldly go where no audiences have gone before.

The Oculus Rift is a headset device that creates a virtual environment all around the wearer. It uses positional and rotational tracking sort of like the Kinect does for Xbox game playing. When the wearer turns right, the view shifts right. Turn left and the view moves left also. As of now, the Oculus Rift is used primarily by gamers but the device’s Oculus Cinema feature will allow wearers to watch films on it too. The company has already inked an agreement with 20th Century Fox to distribute more than 100 films in the studio’s library via the Rift.

Technology that virtually puts someone in the middle of the action could easily be adapted to new kinds of films too. As many games have become more like films, it isn’t too far a stretch to imagine games and moviescombining into a hybridexperience – a film that allows the viewer some control over its narrative and ending but without the leveling up and combat that most games feature. Interactivity could even let the watcher guide the story as it unfolds.

The concept of filming differentoutcomes for each audience member to control virtually could seem challenging or exciting, depending on the director’s point of view. Giving viewers the power to help tell the story in an interactive film would change the relationship of the director to the audience. Instead of telling a single narrative, directors could explore all the possibilities they might have wanted to see but couldn’t justify within the framework of a conventional film

Another thing VR movies would share with games is their flexible run time. Audiences know how long a film will be and view a single, uninterrupted story from the time the theater lights go down to when the closing credits roll. With an interactive VR movie, that run time might be two hours or two days, depending on how the viewer wants to explore different pathways. Are filmmakers ready to create something that audiences can immerse themselves in for hours at a time?

The way we shoot films might also change dramatically. The beauty of VR is that it isn’t just a static film we sit passively and watch. Instead, directors can shoot in first person, allowing actors to interact with the VR unit’s audience members directly. You won’t just watch characters have a conversation – you can now inhabit a character in his or her world or even switch between multiple characters’ viewpoints. VR’s promise of complete engagement gives viewers a totally new and participatory experience that’s limited only by the filmmaker’s creativity and imagination. Think about being able to interact with Matt Damon’s character as he’s stranded on Mars – or being in charge of the decisions that change the outcome of the film.

Computer and console games are already approaching this level of interaction, but they’re still a two-dimensional experience. Player’s control what happens to some extent, and games have shipped with multiple endings since the 1990s. But when we talk about full virtual reality, each audience member would have the power to affect the whole environment and move through it as if it were real. That opens a world of new possibilities for multiple viewings, giving audiences the chance to experience new aspects of the filmmaker’s original story.

VR presents a whole new set of challenges for directors. Swooping, arcing camera moves that excite a cinema audience might leave a VR audience disoriented. A full VR experience would also involve hours of additional footage to tell a story from several points of view and with different plot twists and endings. These challenges allow filmmakers to say everything they want to communicate,and at the same time, lets the audience members be participants too.

The first movies featured a single, fixed camera with events unfolding in front of it, but look at all the techniques directors and cinematographers have developed for telling their stories. In many ways, this new technology could be as revolutionary as going from stage plays to cinema and it has the potential to change the visual language of filmmaking just as dramatically.

About the author:Jonathan Roberts is an NYU Tisch student of cinematic and commercial filmmaking with a passion for storytelling.