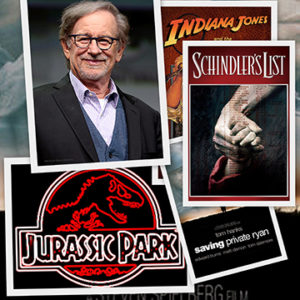 On October 1, 2017, I ran a poll on Twitter to see what you thought was Steven Spielberg’s greatest film. It’s tough to narrow down the choices to four, and I heard about it in the comments: “Jaws? How do you skip over that classic?” “How do you forget E.T.!” (Duly noted, folks. Look for another poll soon.)

The ultimate winner* was a huge surprise to me. Jurassic Park got more votes than Saving Private Ryan, Raiders of the Lost Ark, or even the critically acclaimed and award-winning Schindler’s List. What made dinosaurs better than an Academy Award Best Picture nominee, a Best Picture winner, and an action-adventure movie so spectacular that it transformed the genre? I think I know what it is, and it’s also why we can’t seem to get away from superhero films. 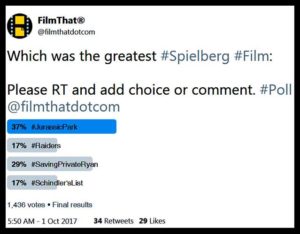 I believe Jurassic Park won because it was the film that was farthest from reality. A blockbuster when it first hit theaters, it also enjoyed huge popularity for its re-release in 2011. The sense of wonder Ellie felt when she first saw living dinosaurs was a mirror for the audience’s delight, and it’s never really faded. Each Jurassic Park sequel has done well at theaters too, feeding our yearning for dreams.

That’s even truer today than it was in 1993 when Spielberg’s dinosaur epic first hit theaters. According to Box Office Mojo, other films in the top ten included Mrs. Doubtfire, The Fugitive, Sleepless in Seattle, The Pelican Brief, and a very different Spielberg film, Schindler’s List. Their plots include history, relationships, intrigue – stories told on a human scale.

Compare that to the list of top-grossing films of this year so far: Wonder Woman. Guardians of the Galaxy. A live-action remake of Beauty and the Beast. It. The LEGO Batman Movie. One film, Dunkirk, is one of only two that isn’t a form of fantasy or escapism. Successful films are still accessible to audiences regardless of genre. But the trend toward the unreal in films is undeniable. I’d even argue that another top-grossing film of 2017, The Fate of the Furious, is its own kind of escapist fantasy, leaving Dunkirk as the sole film rooted in realism. Go back a year to 2016, and not a single such film cracks the top ten.

However, I think we also have to mention the demographics of my Twitter feed. It is quite possible that many of the people who responded may not have even been born in 1993 and may not have seen some of the movies in the poll. Even though I’m sure this is relevant to the poll results, I want to focus and relate the outcome to the bigger picture.

There’s another time that theaters were similarly full of fantasy, and we don’t have to go back 65 million years to find it. In the 1930s, screens were filled with opulent settings and breathtaking fantasies. Stories of down-on-their-luck protagonists who found wealth and fame, such as 42nd Street and A Star is Born, were huge. So were silly romances or comedies in lavish settings. Fantastic tales like The Wizard of Oz, The Invisible Man, Frankenstein, and King Kong had their fans too.

It’s easy to see why the film industry greatly expanded in the 1930s; Moviegoers could take refuge from the Great Depression in theaters. For a few hours, they weren’t thinking about finding work or how to pay the rent. They went to see on the screen what they didn’t have in their daily lives: ease and elegance. When they were watching Gone with the Wind, they were transported to another time, but they weren’t there for an accurate history lesson. They were there for the rags-to-riches tale, the glamor and the romance.

Welcome to the new age.

Are we in a new age of escapism? Jurassic Park may have been made in 1993, but it has huge cultural resonance today. Superheroes and epic tales of good versus evil are everywhere. If audiences of the ’30s went to the movies to see the security they lacked, what are modern moviegoers getting from these larger-than-life stories?  In some ways today’s realities are comparative to the dystopian world of 1930’s Germany. Once again, the leaders of the free world are finding it difficult to control the destructive actions of a few.

I think people want to feel a sense of catharsis that may not be achieved in their own reality. Wonder Woman, Starlord, and Rey are clearly the good guys, and they discover they have more power than they ever knew. Real people – heroes like Oskar Schindler and the soldiers portrayed in Dunkirk are powerful in their own dramatic way on screen but they bring the desperate circumstances of their time to the viewer instead of giving audiences the power to escape from it.

Although the four films that were part of my Twitter poll are older than the recent wave of superhero flicks, they still must be viewed through the lens of this modern move toward escapism. I think that’s why the film that was farthest from the current world, was the big winner. As one of the people who responded to the poll pointed out, three of the choices had Nazis getting punished, and one had dinosaurs.

When the daily news constantly bombards us with stories of an unsettling world and imagery of unrest and instability, maybe it’s easy to see why the dinosaurs won.

*Note: The high number (1,436) of votes makes this Steven Spielberg’s greatest film poll statistically significant. If we re-ran the poll, there is a 95% confidence level that the poll would not vary by more than 5%, ensuring that Jurassic Park would be guaranteed to win again.